Thank you so much for that note you left on my car this morning. Without people pointing out my stupidity, sometimes I wonder just how I’d be able to drag myself out of bed every morning.

Your note kindly pointed out that “I should know better than to park here” which is a good, firm yet fair point. Unfortunately for me (and yourself) someone was parked in my space last night and, seeing as it was about one in the morning (maybe earlier, I often struggle with telling the time) and I was suffering from a severe case of “too tired to care” I saw this space just so happened to be empty along with at least one more. I decided to play rock paper scissors with the two spaces (best two out of three obviously, to make it fair) to try and assist me in making such an incredibly complex decision. Upsettingly, I kept winning against both spaces. After about ten minutes I decided that clearly I was some form of rock-paper-scissors god, so instead resorted to the tried and tested method of eenie meenie miney moe. This is when your space won. Or lost.

I did however have a brainwave, and decided to leave a note on their car; 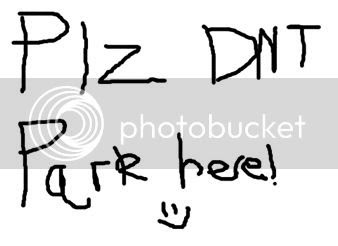 Whilst maybe not as detailed or well written as yours, I feel the smiley face makes mine better. Do you like it? I think it gets the point across quite well.
As you can see, my handwriting is terrible, so I had to write this on the computer. It took about fifteen minutes to turn the stupid thing on, but I got there in the end.

Your note left me in tears this morning with your hurtful words, so I’d like to offer a truce:

I’ll do my best to not park in your space in future, but I would ask that you be kinder when you next leave a note.

Yes, I was in the wrong, but they were mean!

flausher
United Kingdom
A guy with an opinion about everything, but desperately trying to cling onto an open minded approach to life.